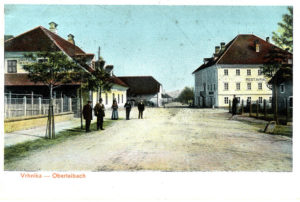 VRHNIKA ON A POSTCARD FROM 1901 (SOURCE: CANKAR’S LIBRARY OF VRHNIKA)

The construction of the second imperial road is being undertaken more professionally, with the participation of civil engineers, miners, military workers and military officers, masons, carpenters, etc. and no longer by pressure. The road is designed so that it does not exceed a slope of 4%, which is supposed to mean that strapping was no longer necessary. Plans for a new road were prepared by the construction director Jožef Šemerl in 1793. The construction of the road began in Planina in 1803, and it took three years to reach Vrhnika for 24 km. Between Vrhnika and Logatec it runs in a completely new direction, the road is macadam, paved with cubes only after the Second World War. 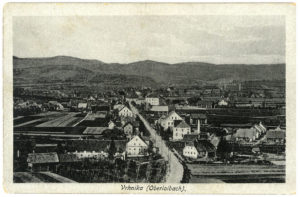 VRHNIKA ON A POSTCARD FROM 1918 (SOURCE: CANKAR’S LIBRARY OF VRHNIKA)

There are two toll booths in operation in Vrhnika at this time, and carriers try to avoid paying tolls by turning from the Imperial Road to Idrijska cesta and the surrounding cart tracks, while road workers prevent evading payment by digging forest paths and digging ditches, by erecting walls along the road. and with high penalties.

The new road leading from Vienna to Trieste is a wide and flat enough road to transport cargo with the same large carriage with several pairs of horses all the way, so the volume of truck-related activities is greatly reduced, and workers in the port lose their jobs. only bricks and wood are loaded on the Ljubljanica.

Even before the new road was finally arranged, Napoleon’s soldiers descended from Planina on 19 May 1809. They don’t leave a very good impression after four years, as they steal everything they can get their hands on.