In the tenth millennium BC, the area of today’s Ljubljana Marshes is covered by a lake, which is already inhabited by pile-dwellers. For transport by water or to the shore, they already know how to squeeze a tree from one trunk. For this time-consuming work, they use tools mostly made of stone or cornea, and the interior is also hollowed out by burning. In the Copper and Bronze Ages, they already use simple axes. So far, over sixty logs or trees have been discovered in Barje, most of them younger, which means that the tree was used as a means of transport until the Middle Ages. So far, four trees from the mound period have been confirmed by the dendrochronological method. 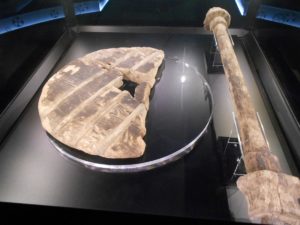 There are many logboat trees in the pre-Alpine world, so we should be particularly proud of the 5200-year-old and thus the oldest discovered wooden wheel with an axle in the world, which was excavated in 2002 in Stare gmajne near Verd. The wheel and axle are part of the cart (ciza), made and used in the younger phase of the settlement of the mound. The wheel, with a diameter of 71.2 cm, is made as a full disc with a rectangular hub made of two boards made of ash wood from a more than 80-year-old tree and connected in width with four ridge slats. It is part of a wagon or ciza, suitable for the hilly landscape, which includes the hinterland of the then lakeside Ljubljana Marshes. Pile-dwellers use it either to transport captured game or to transport field crops to the edge of the lake. They are already using draft cattle to transport the wagon.