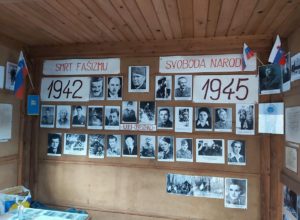 In the situation of working illegally or in war itself, where normal communications cannot be used, every political movement must pay maximum attention to establish independent illegal connections for safe and quick transfer of reports, messages, instructions, etc. Communications through Terenski vod (Field Platoons) that were set up in the national liberation war (NOB) demonstrate the resourcefulness of the thousands of participants that the leadership of the national liberation movement (NOG) managed to organise in one of the most original and comprehensive post networks. These were active throughout the war, they covered the entire territory of Slovenia and beyond, and facilitated quick connections for conveying reports and instructions of different political and military NOG leaderships. 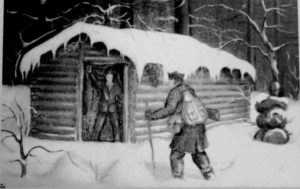 was active from November 1942 to the end of the war in 1945, in the woods behind the Ljubljanski vrh, only a few kilometres of the air distance from Vrhnika, Logatec and Borovnica. The fighters in this unit – Terenski vod (TV) number 17 – maintained courier connections with the TV10 at Zavrh above the Iška river, TV2a on Kališče near Logatec, and TV2 in Dolomites (Gradišče above Podsmreka), while in 1943, they also maintained a direct connection crossing the occupation borderline with the German troops, in the direction towards Gorenjska. The paths of the TV17 couriers crossing the heavily guarded railway, as well as the Ljubljana–Triest road and the densely spread enemy strongholds in the Dolomite territory, were undoubtedly among the most difficult and dangerous in the territory of Slovenia. (Text and images: Association of the National Liberation Movement Vrhnika).