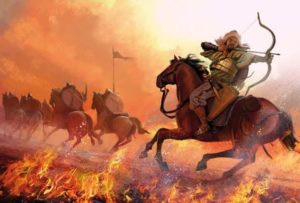 The Roman roads between Emona and Aquileia are deteriorating uncontrollably and the cargo between Vrhnika and Ljubljana is beginning to be redirected to the Ljubljanica. In Vrhnika, they transfer cargo from ships or boats to horse backs (and vice versa) and load it towards Trieste. Milling is also booming, as a load of flour is more expensive than a load of grain and it is easier to bear the high costs of loading over long distances.

With the development of carting, other activities are also developing, such as blacksmithing and animal husbandry, wheel making and saddlery. Merchants and innkeepers serve by renting sheds for harvesting goods, barns for livestock, haylofts, lodgings for trucks and food. The inn business is mainly run by large farmers, but also by the pastor and market dignitaries, as well as the mayor, postman and judge. Inns are the center of events in every place, including Vrhnika, where news and stories are exchanged, and they are often the place where diseases are transmitted.

Cart-making becomes a lucrative business, but lords face many dangers, the biggest of which are bandits, so they join larger caravans on the way. The most dangerous section to Trieste is the pass between Planina and Postojna, which has retained the sinister name Ravbarkomanda (bandit-control-point)) to this day.

BY THE END OF XIX. CENTURY VRHNIKA IS DIVIDED INTO THREE INDEPENDENT SETTLEMENT CORE – BREG, HRIB AND VAS. VRHNIKA STATUS OF THE PLACE IN 1955

In 1719 Emperor Charles VI. orders the renovation of a narrow old road that ran from the port of Breg, across the village and Hrib. Renovations are being undertaken very unprofessionally, so the new slopes are steep 20% and more. Due to the steep slopes, a new market niche opens up for the people of Vrhnika – strapping and lending horses on ascents and gliding (braking) on steep descents.