The Ljubljanica is not a large river, its entire course measures only 43 km, but it has been the most remarkable waterway in Carniola since ancient times. Valvazor also writes about boating – the Ljubljanica is full of boats that transport all kinds of goods that come from Italy and are sent to Italy. Written sources mention the year 1489, when Emperor Frederick granted large boatmen a special privilege – the freedom to sail on the Ljubljanica.

Goods are transported in small and large boats. With small boats hollowed out of a single trunk, they carry up to 30 cents (1680 kg) of cargo. With about seven meters long boatmen or roofers (boats with a roof) they transport people, and with an even longer sandblaster they transport sand. Large boats are up to 20 meters long and carry up to 300 cents (almost 17 tons) of cargo. 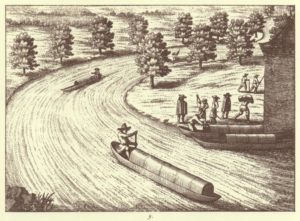 Eminent travelers, such as the emperors Leopold I (1660), Charles VI (1728) and Franz I (1821) also arrived from Ljubljana to Vrhnika by the Ljubljanica river.