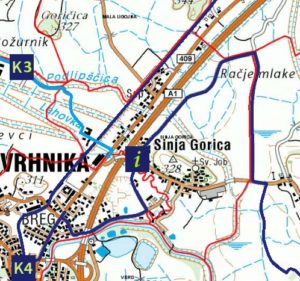 Sinja Gorica is a local community and a place in the municipality of Vrhnika, which is functionally divided into Sinja Gorica and Sap. People have lived in this area since the Old Iron Age and on the top of the hill, west of the church of St. Job builds a hillfort, as evidenced by the formation of the terrain and prehistoric small metal finds. From the top there was an open view of the Taurisci’s fort on Tičnica.

The old village core is formed under the church. It is mentioned as Sweinpuhel (in translation Svinja Gorica – Pig Hamlet) in 1414, in 1474 as Singa Goriza, on the military map (1763–1787) it is entered as Suina Goritza, in the Franciscan cadastre Lepa (Beautiful) Gorica is recorded, later in the XIX. century however, it is referred to as Schweinbuchl. In German, all names refer to pigs grazing in the area. Others believe that the settlement is named after sviba (a type of Cornelian Cherry) and where sviba grows – Svibnja Gorica, but the letter b is lost when pronounced, which is why the German translations are also incorrect. 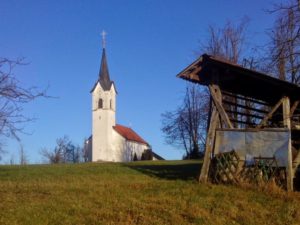 the major attractions in the Local Community Sinja Gorica is the church of St. Job, which was first mentioned in 1526. It is the only church in Slovenia dedicated to St. Job, protector of beekeepers. Job is a biblical person and is synonymous for people who suffer injustice. It affirms that God wants only the best for His beings, but the fulfillment of God’s will can be very painful.

In the vicinity of the settlement there are important wetlands and habitats of legally protected plants (eg močvirska logarica – Fritillaria Meleagris), so most of the local community is included in the environmental area under the protection of Natura 2000.