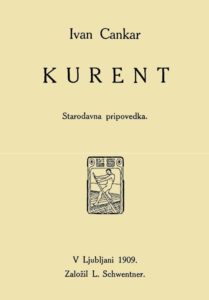 As he stepped out of the woods, he looked down at the morning landscape covered with dew, and began to feel an unknown sweetness by such a beauty. With his eyes full of life, he saw a flowering valley melting in a silver light on the horizon, while seeing his whole homeland with the eyes of his heart, from the fields of Štajerska to the sea...

… He sparingly scattered beauty on Earth from east to west; he had passed by mighty lands without even looking at them – they are lying there desolated, gazing at heaven with their blind eyes, asking for mercy. In the end, a handful of beauty remained in his hands; he scattered it in all four directions, from the Štajerska vineyards to the steep Trieste coast and from the Triglav to Gorjanci, and said: “Happy people will live here; a song will be their language and their song will be shouting with joy!” And it has happened, as he had spoken. The God’s sowing germinated and bore fruit – heavens under the Triglav have arisen… (From Cankar’s Kurent)… (Kurent by Jurij Souček) 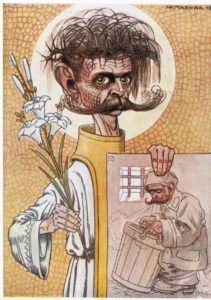 Hinko Smrekar: (1913): Ivan Cankar as a penitent and prisoner

Ivan Cankar was born on 10 May 1876 in a house located in Na klancu (Vrhnika) as the eighth child in an artisan-proletarian family of a market tailor. He enrolled in the Vrhnika primary school in 1882, and in the Ljubljana non-classical secondary school in 1888. There, he joined the Zadruga student society.

After graduating in 1896, he moved to Vienna to study technology at first, but soon switched to the Slavic languages studies. He is one of the four representatives of the modernism in Slovene literature. together with Murn, Kette and Župančič. His drama works were initially influenced by Ibsen and Gogolj, and later by the New Romantic movement.

His works are calling out to the political situation in the country of that time. Prevailing is the theme of an individual in a conflict with the petit bourgeois everyday, while many socially critical ideas are also noticeable.