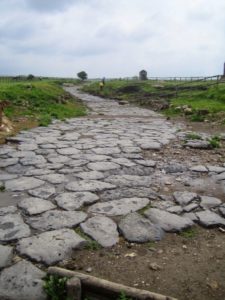 The Romans attached great importance to traffic and especially to road connections. So it is no wonder that as early as around 450 BC, road construction was standardised by law. This determined, among other things, the width of the road at 2.45 m on straight sections and 4.90 m on bends (later the construction of roads between 4.0- and 6.0-meters wide is introduced, so that two carriages can meet), the rules for paving and the right to use private land (easement)..

According to importance, Roman roads are divided into public, side, local and private roads. As a rule, public roads are built as straight as possible, so in some places the slopes reach 20%. Minor obstacles on the planned route, e.g. hills, are removed, tunnels are dug into larger rocky hills and bridges are built over rivers, for which the Romans are true masters. Along the roads at a distance of one mile (thousand (double) steps or 1,478.5 meters), they place round two-meter high milestones made of a single piece of stone. The golden zero milestone (miliarium aureum), from which the distance from Rome is counted, is placed in the centre of the Forum. 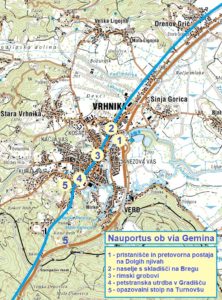 Roman findings near via Gemina in Vrhnika

With the via Gemina, the Romans connect Aquileia with Emona. The section between Nauportus and Emona is built between 14 and 9 BC XIII. Roman Legion – Legio XIII Gemina. According to the finds, the Roman road in Vrhniško descends steeply from Stampeta’s bridge to the five-sided fortress on Hrib, bypassing the (today’s) Church of St. Paul on the south side, crossing Hribski potok south of today’s bridge and leading in a straight line to Stara cesta near the former smithy. To the Church of St. Lenart, the routes of the Roman and Stara cesta overlap, then the road continues below Hrušovca to Frtica and further in a straight line to the Church of St. John at Log..

Interesting: At the end of the Roman Empire, 372 public roads were built over a length of 80,000 km on three continents, from Scotland to Mesopotamia and from the Atlantic to the Red Sea.