Vrhnika lies at the junction of the moor and the Dinaric Alps, right where the easiest and most laid passage from the Ljubljana Basin to the Adriatic Sea and northern Italy. The suitability of the terrain for settlement and the possibility of crossing have contributed to the fact that traffic with various means of transport has been going on here for more than 5,000 years. Legends and material evidence tell us that this area has been (occasionally) inhabited for over 40,000 years. 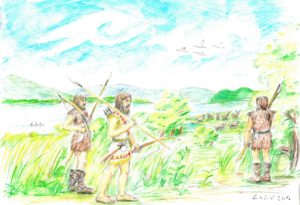 Excavations show that caravan and trade routes took place here in antiquity, the legendary Jason is said to have carried the ship Argo with the Argonauts, amber has been loaded from the Baltic to Aquileia for over a thousand years, and the right road, the vio Gemino, was built by the Romans from Aquileia to Nauportus. in the middle of the 1st century. B.C..

Half a century later, they built a shorter road across Hrušica (Ad Pirum) to Emona, while draining the bogs and shortening the course of the Ljubljanica by almost half. After the fall of the Roman Empire, Barje became swampy again, and the roads disintegrated or became overgrown, so they sailed on the Ljubljanica for many years. When Trieste gained the status of a free city (1719), the traffic between Vienna and Trieste increased so much that the Austrian Empire first built a real imperial road (1809) and then the Southern Railway (opened in 1857). In recent history, the area between Vrhnika and Postojna was given the first motorway in the former Yugoslavia in 1972.

From east to west, the Celts (III-II century), the Eastern Goths with Theodoric the Great (beginning of the 5th century), the Huns with Attila at the head (5th century), the Lombards with the legendary King Albion and Saxons, Gepids, Bavarians, Obri and Slavs (VI century), from west to east the area was crossed by Roman soldiers (around year zero), the Franks with Charlemagne (at the end of the IX century), Napoleon’s French .Stol.) And the Italians in World War II.