The cycling route “History of traffic in Vrhniško” is a circular cycling and walking route, 23 km long (the route on Bikemap) and almost completely flat (“we are surprised by only two shorter and steep slopes in Blatna Brezovica), of which 13.7 km macadam roads or cart tracks. It is suitable for families and for all types of bicycles, but it should be borne in mind that half of the route is on macadam paths and cart tracks and thus less suitable for road bikes. The trail is a joint project of five local communities along which the trail runs – Bevke (4.6 km), Blatna Brezovica (5.1 km), Drenov Grič (4.7 km), Sinja Gorica (3.0 km) and Vrhnika-Breg (5.1 km).

The bike path is dedicated to five millennia of means of transport and transport routes, from the oldest discovered bicycle (5,200 years old) in the world along the Ljubljanica at Stare gmajne near Verd, to the first, 32 km long section of the motorway in Slovenia and former Yugoslavia between Vrhnika and Postojna.

The official beginning and the end of the route is the railway station (at the Agricultural Cooperative or the former Simon Inn) of the last section of the now abandoned railway for decades, which until 1966 connected Vrhnika with Ljubljana. Almost to the border with the municipality of Log-Dragomer, the route runs along the former railway route. It turns onto the bike path along Ljubljanska cesta between Felix Trans and the Top Dom Obnova store. On the main road, turn left to the first traffic light, cross the road here and head towards Vrhnika on the other side, then cross the main road to Drenov Grič twice more, the second time when we turn along the new asphalt road towards Bevke. 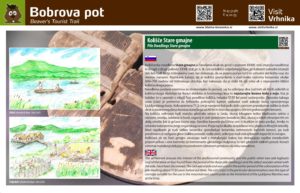 The oldest wheel in the world from Stare gmajne (photo: M. Selan)

Before Bevke, you can drive to the natural monuments Jurčevo šotišče and Mali plac. The path leads past the sports park and primary school, then along the flat bog path to Blatna Brezovica, where the path winds a little past the church of St. Jakob on the Slovenian pilgrimage Jakob’s path and numerous hayracks to the old village center. From there it descends again to Barje, leads past the pile-driving theme park (in progress) to the main road towards Sinja Gorica, turns onto this road and after a good hundred meters turns right back to Barje (Veliki mah). In Bevke we can make a circle along the Bevke educational trail, and in Blatna Brezovica we can ride the other half of the Beaver trail.

After a good kilometer, the path turns left and leads all the way to the fire station in Sinja Gorica along the highway. We drive quickly through the craft zone with the main Vrhnika air pollutants (but the situation has been improving recently, as Saubermacher closed the composting plant, and the municipality also severely restricted the collection and processing of hazardous waste to Kemis), to the Ljubljanica and under the motorway to the Vrhnika district “Impeks”, named after a former import-export company. Cross the Ljubljanska road again by turning right to the first crossing for pedestrians and cyclists. When the trail ends, it is just under a kilometer along the paved bike path. 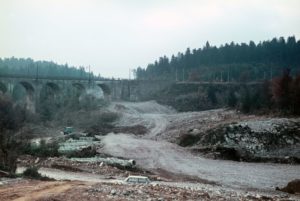 Interesting facts or five millennia of the history of traffic routes and means of transport are presented on ten explanatory boards:

Along the way there are also a few buffets or day bars (Sports Park and Mercator on Drenov Grič, buffet at ŠP Bevke, Žrebiček in Blatna Brezovica, cafe Lev in Vrhnika), and a restaurant or inn is only at the beginning / end of the route, the former ” At Simon’s. ” In recent years, however, the inn has changed many tenants, mostly with Serbian cuisine. Otherwise, there will be no problems with food, as there are at least ten inns and restaurants close to the route. Nearest routes (from a point on the route):